Ukrainian citizens on both sides of the demarcation line have become  more tolerant towards the idea of reintegration of separate Donbas districts under the control of Ukrainian authorities.

This can be illustrated with the data obtained when Social Cohesion and Reconciliation (SCORE) index was researched in 2016 and 2018.

Respondents analyzed the scenario which presupposed that uncontrolled Donbas territories would remain a part of Ukraine with the same status as other regions of the country have, on condition that decentralization reform is implemented.

This variant was desirable or acceptable by 72% of the residents of the territory of Ukraine which is under government control in 2016, in 2018 the number rose to 78% of respondents.  Thus,  a tendency of growth can be observed. 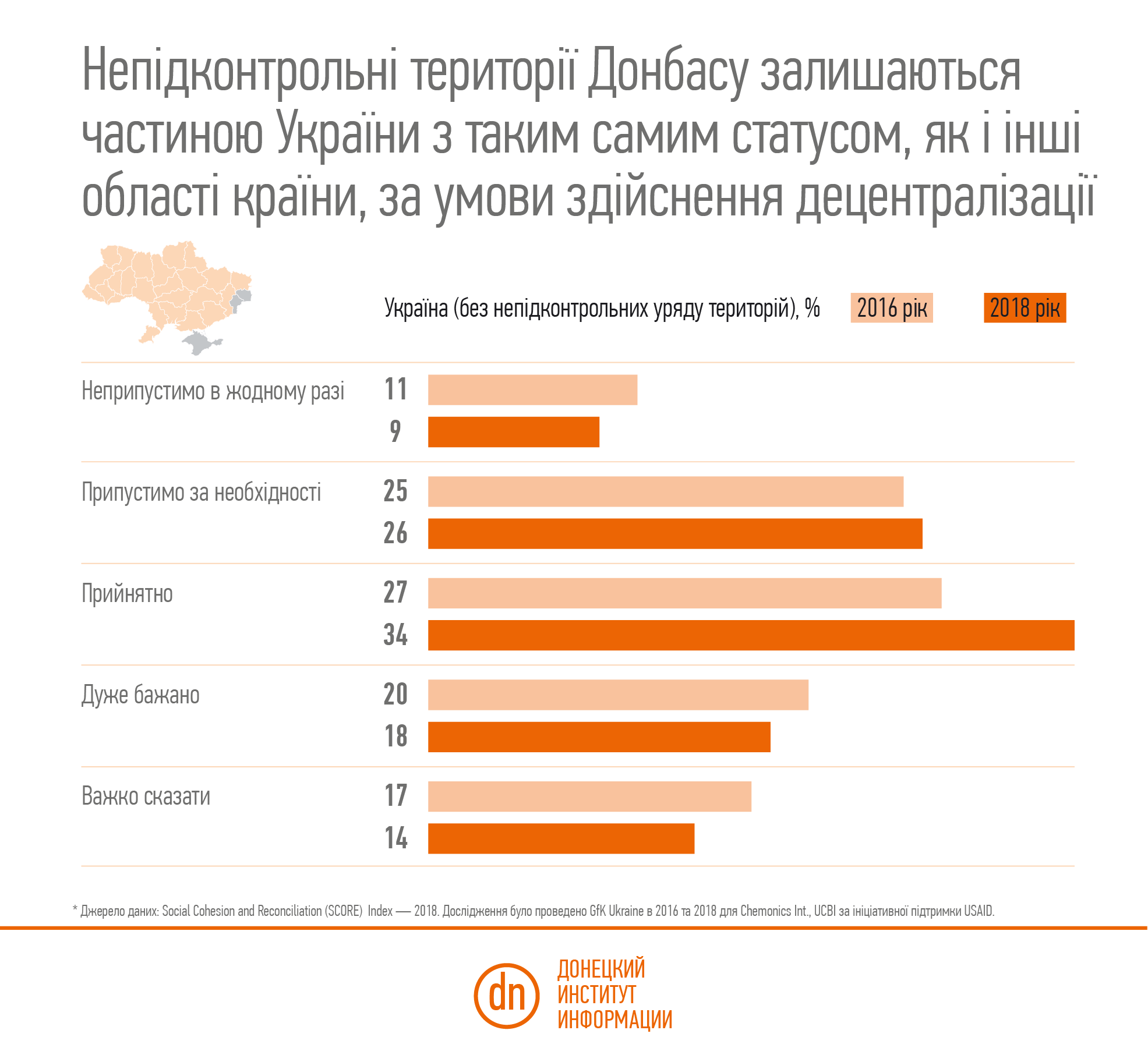 Of course, it is difficult to analyze data obtained on the uncontrolled territory due to objective reasons.

Feeling of anxiety is intensified on uncontrolled territories as residents cannot express views which differ from views of actual authorities openly.

People are wary of expressing their thoughts as this can lead to negative consequences or even violence, therefore any surveys conducted on that territory cannot fully reflect the current situation.

Besides, before 2018, GfK Ukraine survey research had been conducted via mobile phones, but in winter 2018 mobile connection with occupied territories of the Donetsk region was lost and a personal interview survey had to be conducted at respondents’ homes.

If to compare data used by survey research conducted via mobile phones and by a personal interview survey, the majority of the responds the researchers got in the latter case was either “it is hard to say” or expressed support to the Russian Federation and actual local authorities.

In researchers’ opinion, this means that respondents tend to be more open during a phone survey as this method does not presuppose asking the name and address of the respondent while personal interview means that this information is needed for quality   control.

Taking into consideration that people who live on uncontrolled territories tend to hide their pro-Ukrainian views, the most significant indicator can be the number of those who think that Donbas reintegration into Ukraine with the same status as other regions have is unacceptible.

Hypothetically, respondents who support reintegration but are afraid to express their views could not choose this variant and opted for "acceptable if necessary" or "hard to say", for example.

In general, it can be said that despite 4 years of the armed interstate conflict, the majority of citizens who live on both sides of the front line have preserved the desire to live in one country and this that this variant of conflict resolution is acceptable.

The number of people whose views on the future of the territories are radically opposite has slightly decreased which can signify that people have become tired of the conflict and would like to end it.

Thus, in 2016, in the uncontrolled areas of the Donetsk regions, 59% of respondents were for or agreed with the variant of the territory reintegration with the same status as given to other regions of Ukraine if decentralization is implemented. In 2018, the number of such respondents was 63%.

The number of respondents who considered that scenario unacceptable in any case reduced by 3%, from 34% to 31% (the indicator change is statistically relevant as that corresponds to the general tendency of the decrease of the number of those who are  against the scenario). 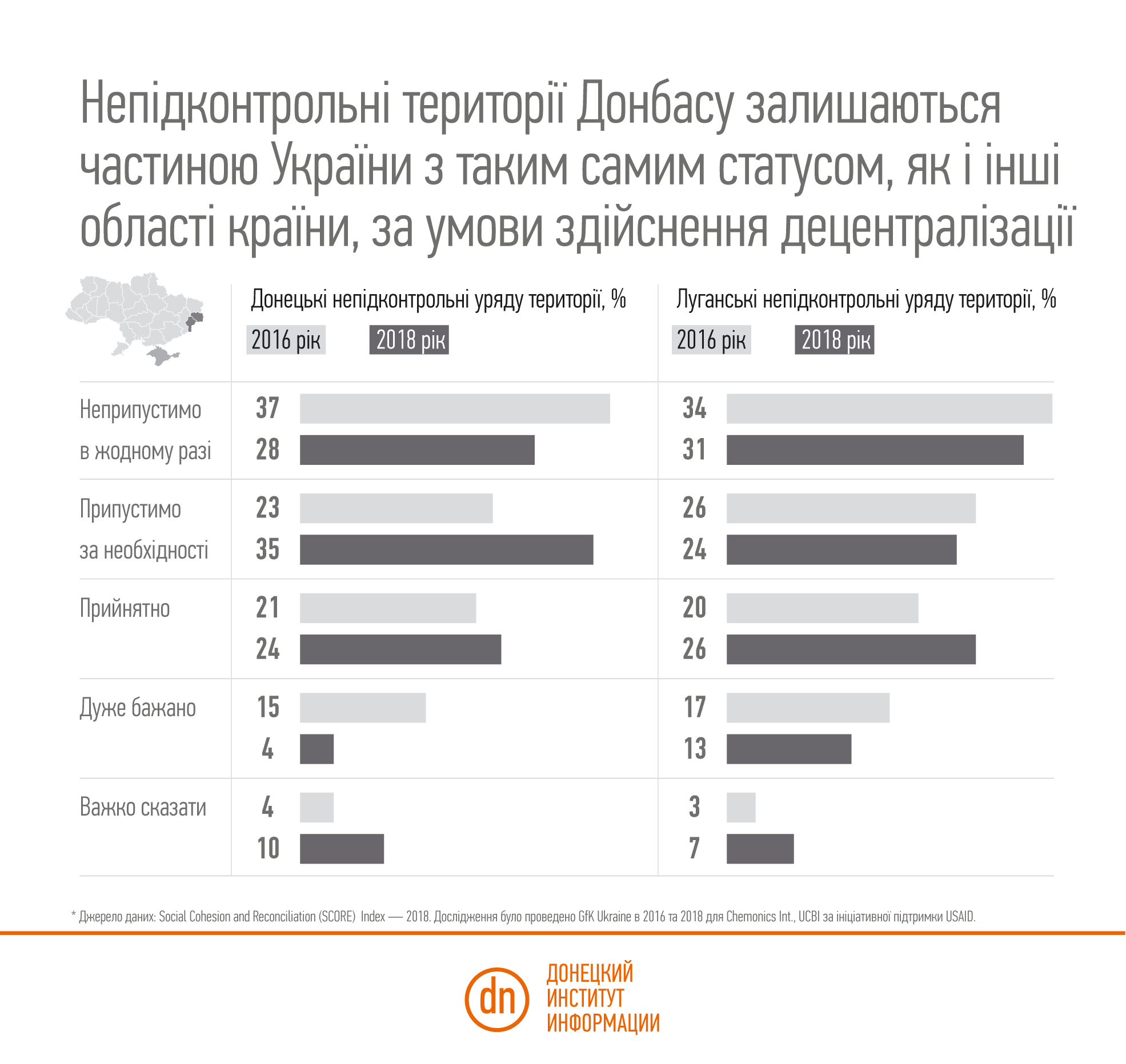 The research was conducted by GfK Ukraine in 2016 and 2018 for Chemonics Int., UCBI, initiated and supported by USAID.

The survey was conducted as personal interviews at respondents' homes.

In 2016 and 2018, in the Luhansk region, the survey was conducted as mobile telephone interviews (СATI). In the Donetsk region, in 2018, personal interviews were conducted at respondents' homes.

Thus, for the uncontrolled territory of the Donetsk region, the data is not entirely comparable with data of the previous survey (2016) as different methods of survey were used: in 2016 it was CATI method with mobile telephone calls; in 2018 it was personal interviews at respondents' homes.

In winter 2018, telephone survey was impossible as there was no telephone connection of Ukraine with the uncontrolled areas of the Donetsk region.