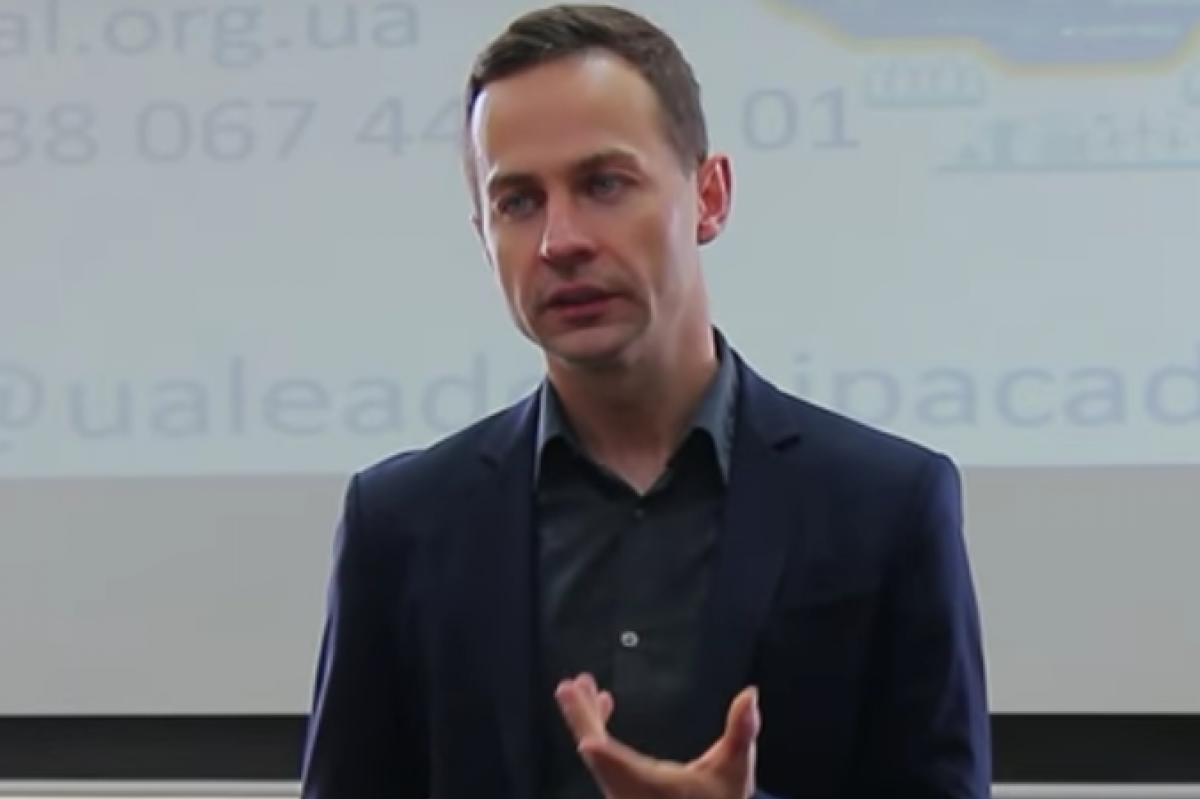 Oleksiy Matsuka, chairperson of NGO Donetsk Institute of Information held a meeting with students of universities that had been relocated from the uncontrolled Donbas territory. The event was initiated by the Kenan Institute. Here are some excerpts from Matsuka’s speech: Oleksiy Matsuka: My name is Oleksiy Matsuka, chairperson of NGO Donetsk Institute of Information. It was extremely difficult to spread information which had been out of the context approved by authorities or had not been censored in Donetsk in 2014. Our hypothesis is: we should develop Internet television as it is impossible to block Facebook or YouTube. Well, it is, of course, but they are not blocked so with the help of these networks people have access to information and to what is happening to them. You know that the “LPR” and “DPR” “Ministries of State Security” work hard to prevent information which they cannot check or censor from leaving the uncontrolled territories. Non-toxic content is not as popular as toxic content which is produced by certain channels in Kyiv, I mean such programmes as “Anti-Zombie”, for instance. The aim of the programme is to show that people who live in Donetsk are zombies and we produce anti-zombies.

This is a very popular kind of hatred spread by media. Our mass media (Donbas Public TV, News of Donbas) deliberately refuse from such steps though we lose our positions in ratings. However, we understand that responsible journalism is important and we are becoming the leaders in responsible journalism sphere in the Donbas. We can show our own example. We can tell people: “Look, we refuse from some aggressive content, from some tags we could be spreading”. We used to have colleagues from former Yugoslavia. They used to tell us: “Look, you are 80 kilometres away from the demarcation line and uncontrolled territories, and the questions you discuss in Slovyansk and Mariupol are the same as the ones we discuss in Yugoslavia, in Serbia, in Kosovo 25 years after the conflict”. This also shows that we are taking giant steps to develop professional journalism in our society. Such editorial offices as ours, as Hromadske TV and other editorial offices, such as Hromadske Radio are the locomotives which help improve the quality of journalism, so that it could help our society reduce the level of aggression and become more tolerant, to the one that is capable of discussing issues and the one where you can come to a TV studio, to a TV show and talk to each other instead of taking weapons and joining in hostilities in Lenin Square in Donetsk. The principles our editorial office is lead by are as follows: to give the way to peacemaking initiatives, to let ordinary people speak, to invite qualified experts who can interpret this or that fact. Well, sometimes this does not look very interesting, it is not a series or a Vice news video shot on the demarcation line. This can look like an expertise of some issue. However, we think that a person who starts thinking about some issue will have a chance to get this information. There is not a single channel in Ukraine that would give us real quality information about what is going on in the society. It is clear that audience wants to get such information. I do not know anyone who wants to be cheated on.

Where can people get it? It is possible nowadays to watch UT-1 Public Channel.

Still, does it give answers to questions we hear from the East of Ukraine? I think, it does not. This is my personal opinion. You will not hear questions people who live in the Crimea ask on UT-1. There is not a single talk show on the national public broadcasting channel which would answer the question: what is happening to our people in Donetsk today? We understand that there is a long way to go. Firstly, we have to think about our content. Secondly, we have to think about the audience. The third thing is work with new professionals and journalists who enter the profession. The fourth one is working with the traumatised part of the society that has gone through all the events, the war and so on. The fifth one is working with those who pay for this content, namely, our donors, as we have to make our position clear, to meet with them, to explain why we we are doing things in this way, what our policy is. Our Organization is responsible for all this.

We are overloaded with this work, you cannot even imagine how much there is to do. We constantly meet with people who live in these regions, with students, teachers, future journalists, professional journalists and we try to explain one simple thing which is journalism must go back to ethics, to standards as journalism can be a peacemaking tool as well. Why not? Journalism can be a tool which will help us overcome mistrust in the society. There are a lot of events, plans, work and information around us. We must be at several places simultaneously. The answer to the question how to set the priorities and arrange everything is simple: you should be where you are most needed now. Where can I really change the situation? Where should I be when something is happening in the Donbas? Shall I be in Slovyansk, to be able to communicate with people, at checkpoints, and so on? Where should I be if I understand that today’s youth will change Ukrainian journalism tomorrow? This youth will go to editorial houses. I have to work at universities to tell them about our mistakes and our views. Where should I be if I see some injustice towards fellow journalists? In court, of course, as they are our colleagues, this is our clan. Where can I be the most efficient? This is the most important question which can be asked every morning. Then, you look at your agenda for the day I understand where you have to go. Where should I be to improve the quality of our content to make it more influential? In the editorial office, of course. І should be the editor to do everything I can for our journalists to understand responsibility for the content they produce. This principle gives us the answer to the question what we can do to overcome the crisis in the most efficient way and where we have to be in this or that moment.

Audience member — What made a young Political Science student Oleksiy Matsuka become a journalist in Donetsk, even more than that, to become a rebellious journalist? It would have been mush easier to ask Yanukovych soft ball questions, to play giveaway checkers with those authorities and not to have your car burnt right in front of your windows.

Oleksiy Matsuka — I was really motivated by the fact that I wanted to try to change the situation with the freedom of speech and access to information. When I was in Donetsk it was impossible to get some data or to conduct an investigation. However, we started doing that step by step.The local authorities noticed us. They tried to bribe us. Still, my motivation was the same: what I can change and how it will influence the society.

Oleksiy Matsuka — We have a very complex system in Donetsk as we are locals ourselves. We have people there who have not been public persons for a decade. There are a lot of freelancers who remain there. Not everyone has left the area. We use our old schemes of working with people, so this is not too risky. Besides, we see that there are new people who enter the profession, who watch our programmes, our presentations, who go to uncontrolled territory. A lot of people go there. Safety is the primary issue. If we are not 100% sure how safe it is, no one goes there and no one works there as the journalist’s safety is of utmost importance to us.

Audience member — Does our state have any consistent myth which could be broadcast on the territory to increase the legitimacy of the Ukrainian authorities in the locals’ eyes?

Oleskiy Matsuka — In my opinion, the only thing we can do is to launch a show on some central Ukrainian TV channel which would be aimed at the audience of the occupied Crimea and Donbas and which would explain them what іs happening, but the editors must be extremely careful while choosing speakers for the show as these speakers must be unbiased, they must not be politically engaged or give populist assessment of the situation. They must work as the OSCE does. For example, I offered to congratulate Donetsk and Sevastopol residents on New Year on behalf of all Ukraine on UT-1 TV Channel in 2014 or 2015. This is all, we do not have any other problems in out country now, the war is the main one. What reforms of investments do you speak about? There is a war in our country. The first thing we have to do in to solve this problem, to overcome this situation in a peaceful way.