A new economic model should be built after the Donbas blockade — results of a round table in Kramatorsk. An analytical report “Half a year after the seizure. How “DPR” industry works” which had been prepared by NGO Donetsk Institute of Information was presented in Anti-Crisis Media Centre (Kramatorsk) on September 19.

“DPR” representatives seized Ukrainian enterprises which are located on the uncontrolled territory on March 1, 2017. Control over 43 enterprises was established during a so-called campaign for introducing external administration.

Donetsk Institute of Information conducted a research into the way the industrial enterprises located on the uncontrolled territory work after the breakup with the Ukrainian economy.

Vitaliy Sizov, the Organization’s analyst who presented the report said that big enterprises which had been seized failed to fully restore the production and find new markets for it after half a year. 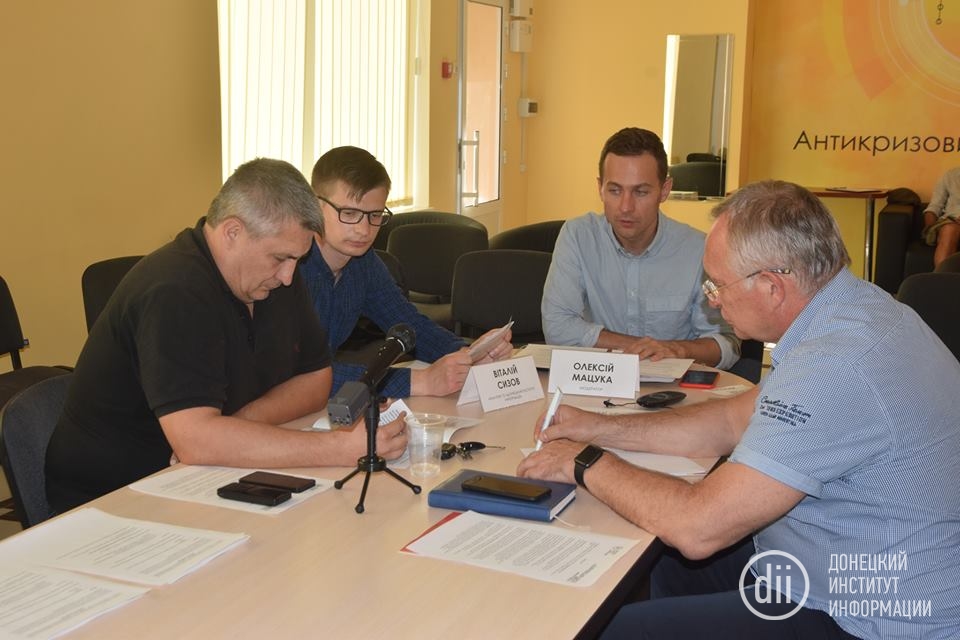 The structure of industry on the on the uncontrolled territory is changing. Metallurgical industry is not the main donor of the budget any more. The self-proclaimed authorities are restructuring the coal industry according to the Russian model, they are planning to leave only profitable mines. The Russian Federation has conducted several steps: it has recognized the documents issued by the “DPR”, simplified the procedure of obtaining the Russian citizenship for Ukrainian residents. Such enterprises as the Centre for International Payments and the Centre for the Economic Cooperation of the Republics have been registered on the territory of the Russian Federation and in the annexed Crimea. Some Russian politicians claim that the conditions under which the Donbas residents should be able to stay on the Russian territory must be simplified. The report says that these actions are directed not at devepoling the industry on the uncontrolled Donbas territory, but on preventing social unrest and motivating active people to move to Russia. At the same time, there has been a considerable increase in the amount of coal transported through the Russian ports of the Sea of Azov and the Black Sea basins. It is possible that the coal arrives from the uncontrolled territories.

Serhiy Tretyakov, head of Nash Kray Political Party Donetsk regional organization, who supported the idea of preserving economic ties with Ukrainian enterprises which are located on the uncontrolled territories, thinks that the industrial decline in that area was inevitable. The process was made faster by hostilities and economic isolation of the region. The economic breakup led to the fact that fifty-million dollars worth of coal was seized by “DPR” on the occupied territory. Tretyakov thinks that after the collapse of the USSR which had a unified economic system, a new system had to be formed on the Donbas territory however, that did not happen. “The Donbas was called in the USSR “a boiler room”. When the Union died, the “boiler room” died as well. The industry was supported, it managed to survive somehow, but no one thought about the future”, said Serhiy Tretyakov.

He thinks that now the Ukrainian authorities should create conditions for the development of a new economic model based on the resources available on the controlled area of the Donbas, for example, manufacturing glass or lithium batteries, the development of agriculture, building industry, etc. Oleksandr Melanchenko, head of Donetsk regional UKROP political party organization, supports breaking economic ties with businesses located on the uncontrolled territory.

He considers that as early as in 2014, the Ukrainian authorities should have thought about inviting highly qualified professionals to the controlled territory, providing them with accommodation and offering them concessions.

O. Melanchenko agreed with the necessity to create a new economic model in the uncontrolled area of the Donbas. According to him, new enterprises should have priority in getting orders. They may produce construction materials for construction sites on the territory of the Donetsk region and provide services to the Ukrainian army.

Target support of particular businesses and business people is not sufficient. The report Half a year after the seisure. How the DPR industry works has already been presented in Kyiv on August 30.

Excerpts from the transcripts of the event:

Oleksiy Matsuka — We are having a meeting in the anti-crisis media center in the town of Kramatorsk to discuss the results of the so-called blockade which had been declared with respect to uncontrolled areas and the consequences of this act as well as to find out whether there are any prospects of such actions on the uncontrolled territory, what to do with such things on the controlled territory of the Donbas, whether there are universal recipes or some pieces of advice for authorities. Thus, we thought that it might be worth holding such an event here, in Kramatorsk now to discuss topical problems on the spot, problems connected with economy as well as the consequences of such actions.

Vitaliy Syzov - We arrived at the following conclusions. I think they are evident. The enterprises that were seized were not able to restore production and find new markets. The structure of businesses on the uncontrolled territory has been changed. Metal production stops being the donor of the budget. Self-proclaimed authorities are implementing tough restructuration of coal mining industry in accordance with the Russian model, in my opinion. Thus, they claim that they will preserve only very effective enterprises; others will be closed. The Russian Federation has undertaken some measures to mitigate the consequences of that. On the eve of the so-called nationalization, the RF recognized the documents issued by “DPR” and simplified the procedure of getting Russian passports for Ukrainian citizens. There is still no banking system on the uncontrolled territory, and local people cannot get any credit. There is something like banks in “DPR” and “LPR” organizations. However, they are not banks, but rather organizations controlling the money mass. Shipment of coal has increased in the Azov-Black Sea basin. This coal from the uncontrolled territory may be delivered to Russian ports. In particular, this is what was claimed by representatives of Ukrainian government and DTEK company representatives. They mentioned Turkey too, but they did not justify their opinion. I think that at present the most evident beneficiaries of the introduction of the so-called “external management” in Russia are Russian logistics intermediary structures which have considerably increased their volume and fractions. I would like to present some figures. “DPR” representatives claim that they are going to close 22coal mines. This will threaten the ecology of uncontrolled territories. They claim that they will provide dewatering, and the Russian Federation will help them. More than that, there are several research institutions in Donetsk where specialists work. Theoretically they are able to do the work if there is money. The problem is how to control the process as international independent observers who could check whether they really do the job and whether what they do is efficient. Considerable increase of coal shipping is observed in Russian ports of Taganrog, Rostov-on-the-Don and Azov. It is likely that this is coal which cannot be sold directly, and this is anthracite. Globally the increase is not so great, but there is increase which took place when the blockade started: during the half-year the increase in Azov is 110%; in Rostov-on-the-Don — 50%; in Taganrog — 30%. Before the war, metal production share in the volume of realized production was 30%. Now “DPR” representatives claim that it has dropped by 15% (however, that cannot be checked). The decrease is considerable as metallurgy was the main source of currency on the uncontrolled territory, in other words, the main source of income. They fired a lot of employees at Ukrainian enterprises. DTEK claims that 36 thousand miners were fired. Were they really fired? They were moved to enterprises of the so-called foreign trade service. However, this business has not started working, and the mines do not work normally. Ukraine has twice increased the volume of coal bought from the Russian Federation. However, that was before buying coal from the USA. Thus, we have come to the conclusion that Russian logistics businesses benefit from the introduction of the “external management”, not the state, but some particular people who are involved in these transactions. And we also came to the conclusion that the industry of the uncontrolled territory has not recovered after the “nationalization”. The structure has been changing, and that will cause unemployment, increase of social tension which the Russian Federation tries to soften providing the opportunity to go to the Russian Federation to the people who are able to work, to active people who can settle down somehow there and will not aggravate social tension on the uncontrolled territory.

Serhiy Tretiakov - I am firmly convinced that the opposite side has no prospects, no markets to sell production, no production. There are only lies. They may sell and supply here, but there is no modern production and technology. However, even the production on the controlled territory does not meet international standards and modern economy requirements.

Oleksandr Melanchenko - Are people from the opposite side working? Yes. We understand that the economic situation there is very bad, and there the labour is cheaper. Cheap labour is in demand only in the countries of the third world. Workers from Horlivka repaired a bridge in Kostiantynivka. We cannot say whether they work legally or illegally as we are not the controlling bodies. We do know that people from Horlivka did the work. Serhiy Tretiakov- Ukrainians.

Oleksandr Melanchenko - Ukrainians, from Horlivka. We have said that they are our people, citizens of Ukraine. We should not say that because of the blockade they came to work here illegally. They would have come to work here if there had been no blockade. There are vacancies, and people come to work whether there is a blockade or not.

Serhiy Tretiakov - You see, I keep saying that the authorities lack professionalism. That is why there are no ministers of economy or infrastructure, or representatives of the Ministry of Energy here. They would have been able to assess the situation together with the specialists who are present here. It is necessary to consider the situation and economic issues, not just to “disconnect oxygen” and leave people in despair. People want peace; they want to work, to earn money, and to be proud of their country.