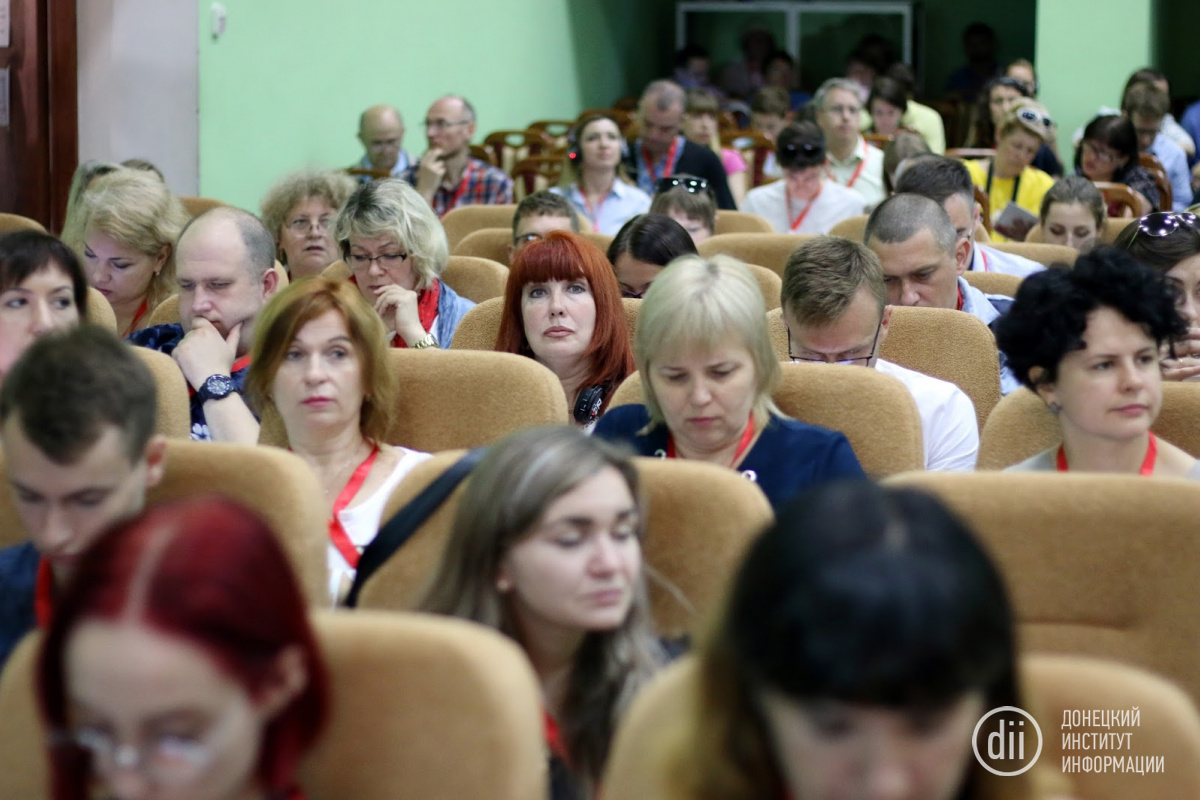 During the project implementation, “Donbas Media Forum”, the major media event in the region, was prepared and held (the town of Sviatohirsk, June 28-29, 2017). 285 representatives of media and other home and foreign organizations took part in it. The participants represented 14 regions of Ukraine, 92 editorial offices, 22 Ukrainian and international organizations, 13 Ukrainian institutions of civil society, including media NGOs. About 70 people were from the Donetsk and Luhansk regions (including 20 from Mariupol, 24 from Kramatorsk), about 70 — from Kyiv (IDPs from uncontrolled territories of the Donetsk and Luhansk regions, representatives of national and local media, NGOs and charity funds). Besides representatives of local MM of the Donetsk and Luhansk regions, there were journalists and editors from Kharkiv, Sumy, Zaporizhzha, Dnipro, Chernivtsi, Odessa, Volyn, Cherkasy and Lviv regions among the participants.

Representatives of Ukrainian organizations (NGOs and charity funds that work with IDPs) as well as international ones (the OSCE, the OSCE special Monitoring Mission, the EU Delegation to Ukraine, US Embassy in Ukraine, Suisse Embassy in Ukraine, German Embassy in Ukraine) participated in the Forum. There were also representatives of state power bodies (the Verkhovna Rada — the Ukrainian Parliament, the National Council on Issues of Television and Radio Broadcasting, Ministry of Temporarily Occupied Territories and IDPs, Donetsk regional state administration, Main Department of Emergency Situations State Service in the Donetsk region, the National Police Main Department in the Donetsk region, Department of the Prosecutor's Office of Donetsk Region, Department of The State Road Service of Ukraine).

The participants who did not represent media organizations paid special attention to the necessity to strengthen their relations with media and the locals from the Anti-Terrorist Operation zone.

Donbas Media Forum facilitates raising journalists’ level of professionalism and the overall improvement of the media sector. During the preliminary registration, 59% of DMF-2017 participants stated that their motivation was “to learn, to broaden their knowledge, and to upgrade their qualifications”. This fact means that Donbas Media Forum is perceived by its target audience (journalists and representatives of corresponding organizations) not only as a platform for discussions but also as an educational event. “DMF-2017” participants had a chance to participate in training master classes held within the framework of the event (all in all there were 16 master classes on the most topical themes). Their aim was to raise the level of journalism standards in order to improve the quality of content. Panel discussions also served as a source of new knowledge and skills, especially in the area of fundraising which is confirmed by the analysis of presentations made at the panel. It should be added, that after the end of Donbas Media Forum a survey was conducted among its participants. 77 substantial answers were obtained. According to the results, the average mark the event got was 4,49 out of 5. The programme and thematic content of DMF-2017 got 4,58 points out of 5. The survey demonstrated that the participants are ready to consider “Donbas Media Forum” as a platform for gaining new knowledge and skills. Generally speaking, 98,6% respondents highly rated the coaches’ work (69,3% - excellent, 29,3% – good), the average mark was 4,67 out of 5. 97,3% of respondents use the knowledge they got during the event for their work. The following coaches got the best feedback: Dmytro Hnap (Master class for investigative journalists) - 4,6 points, 20 mentions; Serhiy Polezhaka, Oleksiy Furman (New digital technologies for editorial offices) - 4,78 points, 10 mentions; Jeta Xharra, Alex Anderson (Covering the conflict in the Balkans – lessons and comparison?) – 4,56 points, 13 mentions. It should be added, that participants of the event need to improve their knowledge about standards, professional ethics, and conflict-sensitive journalism (87 % of respondents). 89 representatives of local and all-Ukrainian MM and corresponding organization managers took part in the event and, according to the feedback, the educational function of Donbas Media Forum reaches not only its participants as 97% of respondents stated that they had shared the knowledge obtained with their colleagues and members of their editorial offices.

Level of Donbas residents’ trust to Ukrainian media is raised. One of the key objectives of Donbas Media Forum for the last three years has been improving the quality of Ukrainian MM as this indirectly influences the level of trust to this or that source of information: when the audience that consumes information of high quality and understands that this information is reliable it trusts the source of information as well. Hate speech is constantly used by mass media which are controlled by the “L/DPR” illegal organizations (this issue was described in “Hate speech in Donbas printed media and on TV” research conducted by NGO Donetsk Institute of Information http://dii.dn.ua/news/309-mova-vorozhnechi-prysutnya-u-ponad-20-materialiv-zmi-tak-zvanoi-dnr-doslidzhennya ), mass media resort to propaganda, post-truth elements and other means which leads to emotional burnout, apathy, emotional tiredness and rejection of the information which is presented in this way. In contrast to this, the audience trusts balanced information which is shared with respect to standards, principles of conflict-sensitive journalism, and which is supported by unbiased facts. Thus, the demands for this format increases. Therefore, such educational events are important for raissing the level of trust towards Ukrainian mass media in the Donbas. In addition, Donbas Media Forum is not only an educational event (whose importance was grounded above), it is also a platform where local journalists that represent different forms of media (TV, radio, Internet, periodicals, etc.). This kind of communication helps elaborate a unified format for different mass media in different parts of the region which allows their audience to form a unified vision of the events thus helping to better understand the events, to increase the level of trust to Ukrainian mass media and broaden the audience. It should be added that the professional level of other participants of DMF-2017 was highly rated by 92% of respondents. Forming the trust which has been seriously damaged by modern means of aggressive propaganda used during the Donbas conflict (hate speech, post truth, etc.) is a long and painful process which demands a lot of systematic and thorough efforts, and it will take a lot of time to see the result. NGO Donetsk Institute of Information is constantly working on this issue within the framework of its projects (“Donbas Media”, “Switch on! Special issue”).

Local media content produced by Ukrainian journalists is improved. Results of DMF-2017 participants’ survey show that activity conducted within the framework of the project helped increase the level of local content. 97% of respondents claim that they use the knowledge obtained during the Forum for their work. The respondents stated that the master classes they had attended influenced their professional activity greatly and help them highlight problematic issues. Citations from some survey answers follow (questions: how did the content you and your editorial house produce change after the Forum?):

It should be added that the Forum helped to decrease tensions between two groups of journalists who represented opposite positions (the ones who show their own thoughts in their materials and the ones who obey classical standards) as, despite the fact that some mass media representatives were quite hostile, there were no open conflicts or manifestations of aggression during DMF-2017. This means that the representatives of the target audience of the Project are ready for discussions and constructive dialogue which can lead to decrease in the level media hostility and promote a national dialogue.. The following fact is also an important result of the Forum — the Forum raises important and controversial themes to a new level and really became the first large-scale platform for a dialogue among professional regional MM to discuss hate speech, its consequences, and influence on media sphere and society. DMF -2017 became an impetus for journalists and forced them to review their attitude to their professional vocabulary, emotional information collection and communication, and journalists' role in the conflict. After Donbas Media Forum, a lot of Ukrainian journalists created various materials on the problem, some themed events conducted.