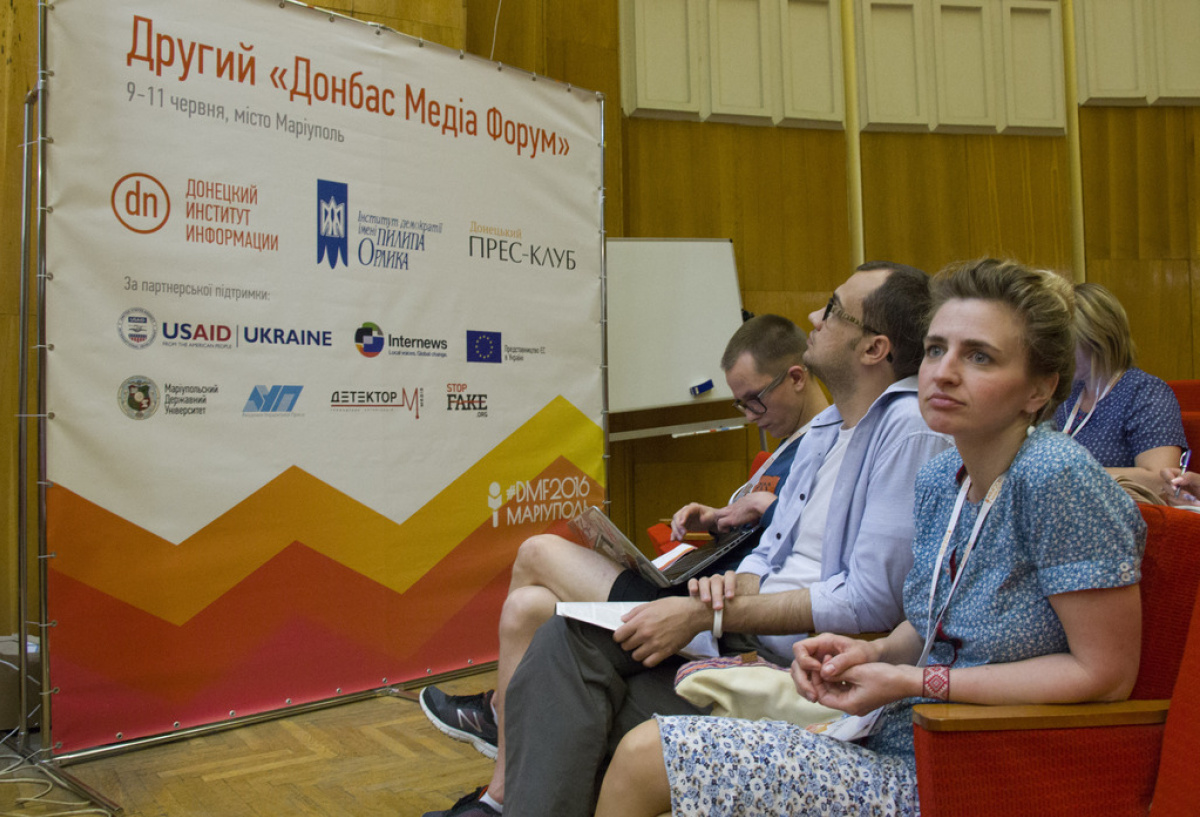 The second Donbas Media Forum was held in Mariupol on June 10-11. It was devoted to journalism in the crisis regions at the time of changes. Donetsk Institute of Information, Pylyp Orlyk Institute of Democracy, and Donetsk Press Club were the organizers of the second DMF as well as the first one held in Kyiv a year ago.

About 300 editors, journalists, media experts from the East of Ukraine, Kyiv and other regions, those who are not indifferent to and are interested in the problems of the Donbas in the context of overcoming the consequences of the armed conflict, gathered together in the frontline city.

The specific feature of the Forum was focus on the themes which are not widely covered in national MM and public discourse. A lot of problems were discussed in the framework of panel discussions: combatting disinformation and counteracting Russian propaganda, ways of constructing the dialogue and rejecting hate speech, finding ways for editorial offices to survive in the conditions of the economic crisis.

«The time of rejecting those who support the opposite point of view has passed away. The time has come for constructing the dialogue with our people who have been living in the conditions of the war, economic and humanitarian crisis. We, representatives of media sphere, directly influence the formation of public opinion and we cannot allow the information abyss between the Donbas and the rest of Ukraine to get wider. Our mission is to inform, to talk with and enlighten people, and to find common language with them. Not with «DPR» and «LPR» militants, but with common people who happen to be in information vacuum and physical isolation». It was stressed, while summing up, by Oleksiy Matsuka, Head of NGO «Donetsk Institute of Information».

The DMF-2016 programme contained several components – master classes: the organizers took into account recommendations presented by DMF-2015 participants and arranged trainings on the most topical problems for Donetsk and Luhansk regional MM. “We hope that editors and journalists got ready-made algorithms for implementation in their work, and trainers and consultants answered the participants' questions in the maximum way, Tetyana Stroy, executive director of Donetsk Press Club, considers. –  I would like to see changes in the work of local MM in a year: no paid journalism and propaganda, new quality content and, thanks to that, successful promotion at media market, and new interesting projects”.

The problem of local MM survival – irrespective of the forms of property – was given special attention by the organizers. Communal MM, which are undergoing the process of reforming, have happened to be in the most difficult situation. Editors and journalists urgently need practical recommendations which will help them survive during the complicated process of reforms and transition to commercial principles of their activity.

One of the most important problems discussed at the Forum was information isolation of the occupied territories of the Donetsk and Luhansk regions which has already lasted for two years. “Unfortunately, the Ukrainian authority and the Ministry of Information Policy have done practically nothing to provide our people, who are influenced by powerful Russian propaganda, with truthful information. There are no Ukrainian channels, no newspapers has been published with the content aimed at those people… Insufficient work of the state is complemented by public organizations and independent media. However, that is not enough to counteract the information war”, says Svitlana Yeremenko, executive director of Pylyp Orlyk Institute of Democracy which investigates the information space on occupied territories.

Donbas Media Forum resulted in a Protocol with practical recommendations for media, ministries, civil society institutes which are dealing with the situation in the East of Ukraine. “Meetings with colleagues-journalists, representatives of respective departments and public organizations are planned to be held after the Forum to discuss recommendations for their further practical implementation. We are sure that these steps will become the instrument for improving the coverage of the events in the Donbas and lowering the tension in the society”, Oleksiy Matsuka summed up.

Donbas media Forum-2016 was held thanks to the support of Mariupol State University and the financial support of the EU Representation in Ukraine, Internews Networks, and USAID.