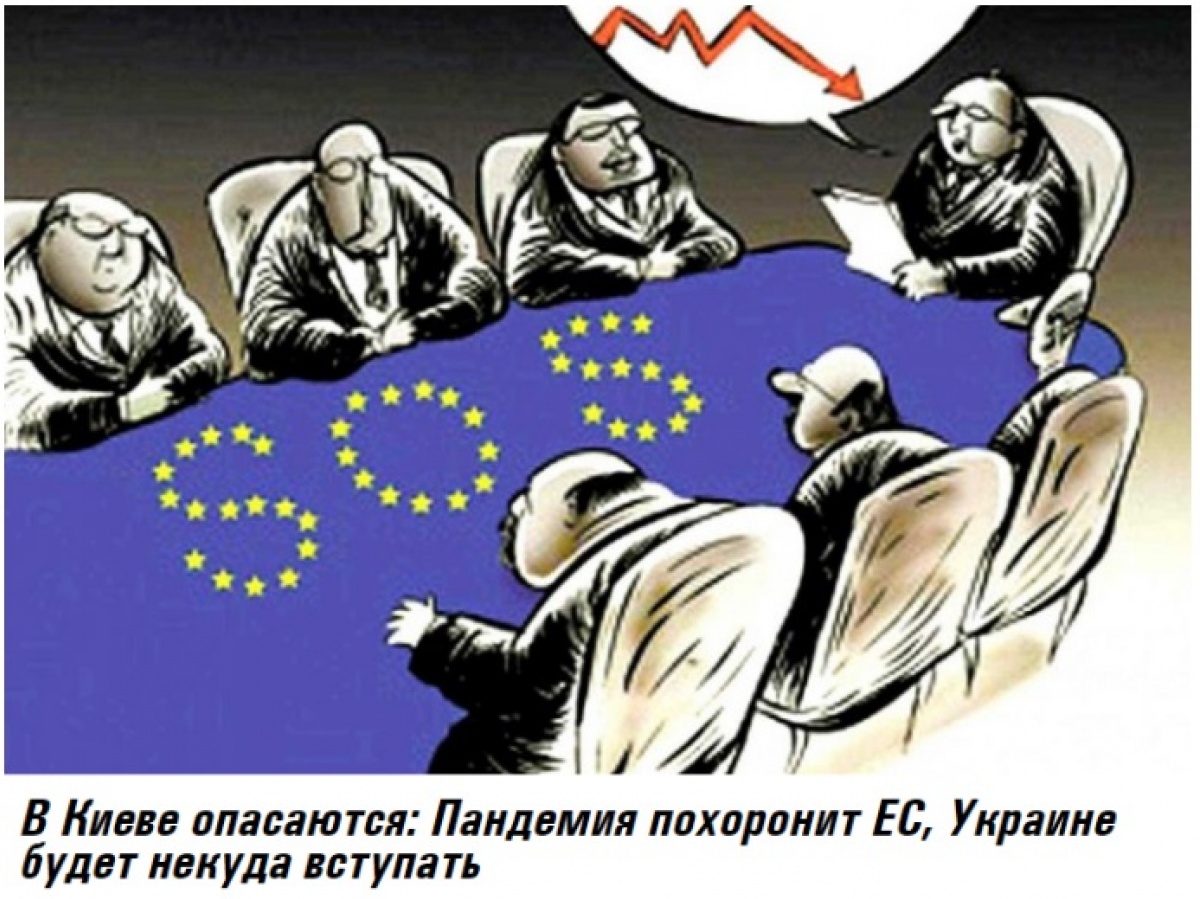 The world pandemic of the COVID-19 coronavirus has become not only a medical problem for the Russian Federation, and the “DNR” and “LNR” groups formed in the Donetsk and Lugansk territories by it, but also a propaganda opportunity - a tool for informational influence on slowing down the process of reintegrating Donetsk and Luhansk into Ukrainian and European space. The media of self-proclaimed “DNR” and “LNR” do not focus on helping people, but on spreading tendentious information about the COVID-19 pandemic in the world and efforts to overcome it.

During the analysis of informational messages of the official sites of the proxy administrations of the Russian Federation in Donetsk and Lugansk, an expert group identified two types of messages. The first one is messages on COVID-19 prevention and countermeasures. In messages of the second type, COVID-19 is used as a tool for informational influence to form public opinion about the Ukrainian authorities and European countries.

Messages of both types have appeared in the “DNR” media space since January 28, 2020. At the same time, information about preventive measures in the media space under the control of the LNR group appeared only on March 5, and the active information campaign began on March 17.

Preventive measures "DNR" and "LPR" to combat the epidemic

Since late January, the content of “the DNR's Ministry of Health Care” website has almost entirely been devoted to the COVID-19 issue. Meanwhile, before March 16, there were only a handful of reports on the site of “the Ministry of Health Care of Luhansk People's Republic” concerning the problem. However, since March 17, almost all of the site's posts have been dedicated to combating COVID-19.

On March 5, the RF Administration in Luhansk launched measures to counteract the spread of COVID-19. The beginning was the briefing of the chief physician of “the Lugansk Republican sanitary-epidemiological station” Dmitry Dokashenko, during which he described the epidemiological situation in some parts of the Lugansk region as a "tense, but stable" concerning COVID-19, and, at the same time, he claimed that the virus had not been detected in the territory controlled by “the LNR” group”. However, reports on active quarantine measures, such as the termination of work of establishments, enterprises and institutions, began to appear on “the LNR
MHC” website and other “LNR” sites only from March 17.

On January 28, “the Ministry of Health Care of the DPR,” as part of the implementation of “the Action Plan for the Prevention of Infection Caused by the New 2019-nCoV Coronavirus in the DNR,” started to publish daily briefings on the situation with COVID-19 in the People's Republic of China based on official statements by the State Health Commission of the PRCa. This information is published there daily at 8:00 am Moscow time under the heading "About COVID-19 cases in the world". The latest update was dated March 24, 2020, which stated that the epidemic situation in “the Donetsk People's Republic” is stable and no cases of COVID-19 disease in the territory of the "republic" have been registered. However, the information that “the Ministry of Health Care of the LNR” prepared medical institutions for hospitalization of patients with symptoms of coronavirus infection COVID-19, and that there were no detected infected persons was provided by “the chief sanitary doctor of the LNR” Dmitry Dokashenko only on March 5.

From that very day, “the LPR” has been intensifying other measures "to prevent the import and spread of coronavirus".

On March 3, “the Decree of the LNR Chairman” “On the Introduction of the Regime of High Readiness” was issued, which envisaged a wide range of measures to counteract and prevent COVID-19, including restrictions on mass events, control of the health of citizens crossing checkpoints, etc..

However, by March 25, there had been no information on COVID-19 on the website of “the LNR cheif," and the coronavirus was mentioned only once and for the first time on "the LPR government" site on March 19: “the Deputy Chairman of the People's Council of the LNR” Oleg Koval participated in the TV show Open Studio on Lugansk 24 channel on March 13. In particular, he said, "It is very important to maintain adequacy. We understand that we could forbid for everyone to leave home and stop the economy, but then in 2-3 months there would be an economic collapse. It is very important to take measures that are commensurate and adequate in the coronavirus situation. Of course, measures should be taken to prevent the spread of this disease: stop flights to countries (to which countries the flights were stopped was not mentioned – ed.), where there is the pandemic, cancellation of mass events, readiness of hospitals, etc.".

On March 17, “SES LNR chief physician” Dmitry Dokashenko announced,“The Republic is ready to fight COVID-19”. On the same day, a message appeared that "the Republic has promptly adjusted the release of protective masks at one of the factories".

On March 17, a message appeared on “the LNR Government” website that “the Republican Job Fair had been canceled, and probably due to that on March 31 the work on updating pensioners' data was canceled. On March 17, the LNR state TV and radio company website announced the suspension of events in “the establishments of culture” of Lugansk till the end of March. At the same time, despite these restrictive measures, on March 18, information was published on “the LNR Government” website on holding three “Subbotniks" (volunteer unpaid work at weekends) in the near future.

However, on March 23, another, more stringent “Decree of the LNR Chairman” On Some Issues Related to the Regime of High Readiness was released which provided for the compulsory hospitalization of persons returning from the countries where COVID-19 is spreading and those who have symptoms of the disease as well as forced observation for 14 days of all people arriving to the territory controlled by "the LNR". A meeting dedicated to COVID-19 was held in the profile committee of the "People's Council of the LPR," with its participants being called to take measures to combat and prevent the disease, as well as "not to panic". On March 24, a temporary suspension of personal reception of citizens was announced.

Information on the epidemiological situation in “the DPR" for the period from December, 2019 to March 5, 2020 ("DNR’s" information):

Currently, according to “the DNR” data, 589 people are being monitored in the part of the Donetsk region under the control of the Russian Federation. Of these, 87 persons are in hospital, 502 are in self-isolation at home. Cases of getting the virus infection were not reported.

On 10.03.2020, the heading "Operational information on the counteraction to the COVID-19 coronavirus in the Donetsk People's Republic" appeared on the website of “the Ministry of Health Care of the DNR” for the first time. The first report of March 10 referred to the hospitalization of a woman suspected of having a coronavirus infection, that happened in “the DPR” appeared on March 9.

03/13/2020 in "Operational information about an epidemic on the coronavirus in Donetsk People's Republic", it is reported that the woman, hospitalized on March 9, was not infected with COVID-19; other cases were not registered, and the "republic" has everything necessary for "examination, diagnosis, and treatment of COVID-19. The same day similar information was published on “the DNR Government” website. No information on the coronavirus was found on the website of “the People's Council of the DPR.” In another message, “the DNR” denied the information released by the Minister of the Ministry of Internal Affairs of Ukraine Arsen Avakov about COVID-19 in Gorlovka. Similar information was published on “the DPR” official site”.

On March 15, 2020, the Ministry of Health of the Russian Federation published information on prevention, diagnostics and treatment, and since March 5, 2020, a number of orders, probably related to anti-epidemiological measures, have appeard in the Documents section of “the DPR Ministry of Health Cra” website.

On March 11, 2020, the information on “the establishment of the coronavirus prevention headquarters in the DNR” was published on “the DNR” official website, and on March 14, 2020, the information was posted on the same site that “the DNR chairman” had introduced "high alert mode in connection with the threat of the spread of the coronavirus infection in “the republic." A similar message appeared on “DNR chairman” Denis Pushylin’s site that day.

On March 17, 2020, “the DNR” closed the intersection of the contact line for citizens and opened a hotline for coronavirus issues.

March 18. A memo appeared on “DPR Healthcare Ministry” site, it claimed that “DPR head” Denis Pushylin had conducted a meeting of “coronavirus operational headquarters”, and that there were no coronavirus cases reported on “the territory, the situation was under special services control and all educational insitutions were to switch to distance learning mode starting from March 19.

March 27. “DPR” authorities reported partial restrictions on the work of restaurants, cafes, other establishments that offer food and entertainment centres.

Coronavirus as a means of information influence

“DPR” and “LPR” propaganda internet mass media which are controlled by the Russian Federation are actively using the COVID-19 pandemic theme to informationally oppose the process of the reintegration of the territories. This theme is actively used by both, relatively temperate propaganda internet MM, namely Donetsk Republic News or DPR 24, which mostly just show a selection of real news presented in an enormous quantity and in a biased way, which help to create a necessary informational background with the help of informational spam, and openly propaganda videos which do not only control the audience mood but also massively post absolutely disinformational content.

It can be said that the main messages posted on “DPR” MM within the context of the coronavirus infection are trying to use the coronavirus factor to show the advantages of the “DPR”and the Russian Federation in fighting against COVID-19 and Ukraine and Western countries’ institutional failure to prevent, cure and combat the pandemic.

“Italy’s “friends” in the European Union ignored Rome’s call for help while Russia sent its specialists to help the country which has suffered the most because of the virus”, reports one of media resources which support the “DPR”.

On March 18, DAN posted an address of “DPR head” Denis Pushylin where he claims that the situation with COVID-19 is under constant control in the “republic”.

At the same time, one day earlier, on March 17, Dan posted disinformation from the so-called “DPR intelligence” saying that there are more than 50 suspected COVID-19 cases reported in the 92nd Brigade of the UAF which is located near Donetsk.

Simultaneously, media of the “separate districts of the Donetsk and Luhansk regions” spread unconfirmed information about the situation on the territory controlled by Ukraine. A piece of news saying that about 70 Ukrainian servicemen with suspected COVID-19 cases had been hospitalized in Lysychansk and Rubizhne appeared on Luhansk Information Centre on March 19.
LITS Site also posted unproved information about Ukrainian civil servants trying to enrich themselves by selling safety masks intended for spreading among servicemen.

“The remarkable thing is that disposable individual safety masks produced by Ukrainian factories are going to be used several times. This means Ukrainian civil servants are trying to earn fortunes at the expense of ordinary soldiers who will use these safety masks many times”, says the news report with reference to “a representative of the LPR people’s militia”.

The news on DAN site attracted attention to alleged the fact that the Ukrainian authorities are not able to arrange efficient disease prevention and treatment for the citizens, unlike the authorities of the Russian Federation and separate districts of Donetsk and Luhansk regions who can do it. Special attention was paid to the problem of evacuating Ukrainian citizens from China to Novi Sanzhary for observation and the local community protested against that decision. “DPR calls the actions of Ukrainian authorities a shame”, - that was a typical DAN heading of the end of February 2020.
The Ukrainian authorities’ decision to temporarily suspend crossing the demarcation line by citizens who are registered on the uncontrolled territory and want to go to the controlled one through entrance-exit checkpoints was also reported about in a biased way.

To neutralize the negative influence the Ukrainian authorities and executives can: